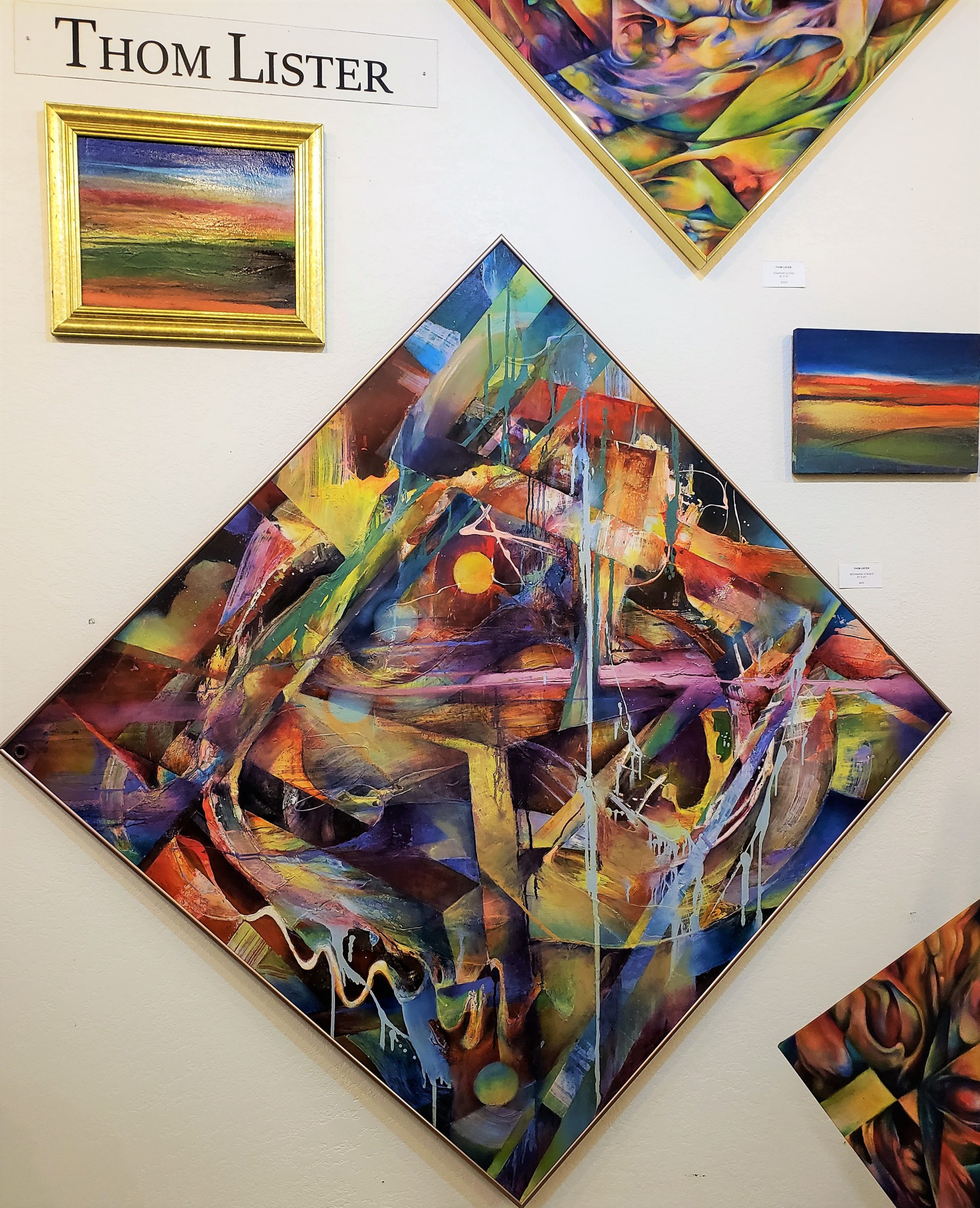 On a cold Monday night, many years ago, I sat in a room full of strangers, waiting for the teacher to arrive. I was taking my first ever oil painting class. It was exciting. The St Paul high school smelled like my old schools from childhood; Cleaning fluid, old carpets and Swell bubble gum. I felt like a kid again, except the tables felt a little bit small. Okay, I was maybe a touch bigger.

Artist Thom Lister walked into the class, smiling and dragging a red wagon behind him. It was piled up with paints, solvent, brushes and canvas boards. He is a big man with a red nose and dark hair. He welcomed us as he set up the art supplies. They looked like candy.

“Here’s your basic palette: alizarin crimson and cadmium red medium, (they both looked Red to me) lemon and cadmium yellow, ultramarine bleu and cobalt blue.”

I looked for the oranges, greens, and purples.

“You get to mix those,” he said. “And here is titanium white. That’s all you need.”

He hid the tube of ivory black. “That one is only for later,” he said seriously. I had thought painters mixed color with black to create shadow colors. I had a lot to learn. I would come to know the properties of ivory black much later. It was fashionable with the newly-in Goth style. When painted as the background, black looks dull and flat. I know because I bought a tube of ivory black and made a dreadful outer space mess with it. Thom Lister was right to withhold it. Next, I mixed it with a heavy glob of alizaron crimson, a bluish red. It seemed miraculous.

Thom led me to discoveries like these. He encouraged us to mix 4 different purples. Four oranges and 4 greens. The joy of color sprang forth upon our canvases, with hints and nudges from Thom. I learned to scumble, layer, glaze and paint soft edges. He covered all the basics and I signed up for the class again and again. They were the high point of my week. The students often went out after class to Applebees and talked enthusiastically about our new knowledge of oil painting. We set up little studios in our basements and brought in new pictures we had painted.

Thom was generous with his praise; enough for us to believe him. Beginning student’s creations are terrible, in general, and ours were, too. We didn’t know it yet. As we learned some subtleties and tricks of the trade, Thom gently pulled us forward in our art work. He was very brave. By the time we became more discerning of our own works, it was too late. Several of us were hooked.

Fast forward 15 years or so. I’ve got a studio in the California Building in NE Minneapolis now, having cleaned up my basement studio years ago. I keep up with several of the artists from the class on Facebook. They’re painting well. One day last year I walked into Dow Art Gallery and Picture Framing to see if I could show my oil paintings there. With delight, I saw Thom Lister’s name above a beautiful wall full of alizarins, cadmium, ultramarine and cobalt. I know that palette; I still use it.

Khanh Tran hired me as manager of the gallery. I am still in awe of Thom Lister’s work. He is known for giving back to the community by repurposing elements of his creations.

Tom’s early career was framed by his Master of Fine Art at the prestigious Pratt Institute in Brooklyn. There he developed an interest in Russian Constructivism, which reflects modern industrial societies. Picasso’s Cubist period was a strong influence for organic and geometrical forms. Thom often takes a painting farther into complete abstraction than Picasso did.

Thom wants to create things that last. Concepts in Art change over time, but some works surmount the fashions of the day, and continue to be of interest to the art-loving public.

Thom mentioned he is interested in painting interior environments. After awhile, I discovered it was not domestic scenery, but rather abstracted mood and individualized interiors. Deeply mysterious, Thom’s canvases glow.

His work is deliberately placed in the gallery’s front room, facing the door. Tom’s colors evoke memories to many people as they come in to enjoy the art.

In his works, Thom Lister mixes alizaron crimson with a small suspicion of black. Cobalt blue finds cadmium yellow, and the secondary colors spring forth like magic from his brush.