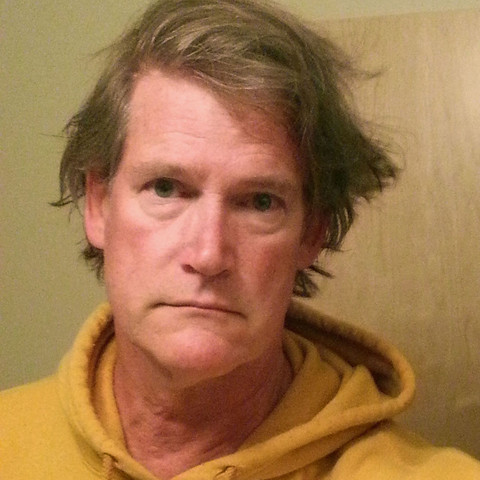 These pieces are an exploration of urban landscapes and the energy they create. I’m interested in how that energy is visualized. Cities can be chaotic experiences and the challenge is to produce an equivalent feeling. Fracturing the subject matter creates the visual energy and also adds the necessary chaos. One of the problems of functioning in urban an environment is how to organize the chaos. One of the ways to do that in the real world is to use grids, either on street maps or even in the actual organization of streets in the initial urban plan.  I use grids in these paintings as a nod in that direction. Artistically the grid provides an organizing static visual to contrast with the underlying asymmetrical chaos of the fractured subject matter. I have also tried to stay away from static “pretty” compositions in favor of more diagonals and oblique collaging, going more in the direction of a raw “street photography” approach, such as in the work of Gary Winogrand and Joel Meyerowitz. The grids and fractures also provide a wonderful opportunity to explore various treatments of edges, one of my favorite painting endeavors. Don Dickinson studied architecture at the University of Oregon, photography at Art Center College of Design in Los Angeles and has a BFA in drawing, painting and printmaking from The School of the Art Institute of Chicago. After studying at Art Center, he had a twelve year career in photography in Los Angeles. Finally realizing that his heart was more in fine arts rather than commercial work, he returned to art school at The School of the Art Institute of Chicago and finished up his BFA.  After SAIC, he taught drawing, painting, photography, and computer graphics at the high school and college level in the Chicago area for fourteen years along with working on his own pieces. He moved to the Twin Cities ten years ago and has seen his work evolve in various directions, this show at Artistry being one of them. His work has been seen in various national shows over the years and is in numerous private collections. Locally his work has been included in the Minnesota State Fair the past few years, was the catalogue cover for the 2018 spring St. Paul Art Crawl, and was awarded runner up Best of Show in the Arts in Harmony show that was seen at the Hopkins Center for the Arts and the Swedish American Institute in 2018. Don Dickenson Achievements in Art: BFA, MFA, St Paul Art Crawl cover, MN State Fair, Arts in Harmony at the Hopkins Center for the Arts, Swedish American Institute